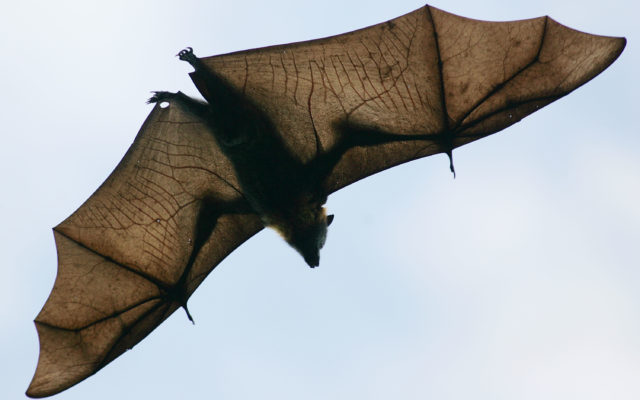 SYDNEY, AUSTRALIA - MARCH 20: A Grey-Headed Flying Fox flies through the air at the Royal Botanic Gardens March 20, 2008 in Sydney, Australia. Flying Foxes, or fruit bats, have taken up permanent roosts in the Botanic Gardens, causing major damage to heritage trees in the park. The Royal Botanic Gardens has begun a program to deter the flying foxes from roosting, as there are now some 11,000 bats roosting in the park. Deterents include noise to disturb sleep patterns, plastic bags attached to branches of trees, strobe lights, odours, and the playing of taped distress calls. (Photo by Ian Waldie/Getty Images)

Did Ozzy Osborne create the best band merch ever?

How did Ozzy Osbourne mark one of the more pivotal events to take place in his storied career?

By fully embracing the notoriety and making some cash off it as well.

On the 38th anniversary of the Prince Of Darkness biting the head off a bat that had been thrown on stage, he’s re-released a plushie version that comes with a detachable head. Last year’s lot of the $40 stuffed toys sold out quickly so you should act soon if you’re going to do your best Blizzard of Oz impression. Perhaps bring it along when Ozzy’s North American tour picks up in May, playing dates through July before he heads across the pond in the fall.

What are some other infamous “rock and roll” stories?